Kappa Sigma Fraternity at St. John’s University-Staten Island Campus has been honored with a prestigious national award. The Rho-Sigma chapter has been recognized as one of the top chapters in North America receiving The Founders’ Award of Chapter Excellence known as “FACE.”

According to Kappa Sigma Fraternity, 30 chapters qualify for the award out of 305 active collegiate chapters. The award recognizes outstanding chapter management, achievement, and program development.

“Kappa Sigma is North America’s largest college social fraternity,” said Worthy Grand Master Justin A. Hansen, president of Kappa Sigma’s international board of directors. “We give more time in community service and more money to charitable causes than any other fraternity. Winning a Founders’ Award of Chapter Excellence means that our chapter at St. John’s University-Staten Island is not just one of the best chapters in Kappa Sigma, but is one of the best fraternity chapters on any college campus in North America.”

“The award exemplifies the good that our fraternity and Greek life does in general, and it’s something we’re striving to earn again this year,” said Rho-Sigma Chapter President, Santo Tiralosi. 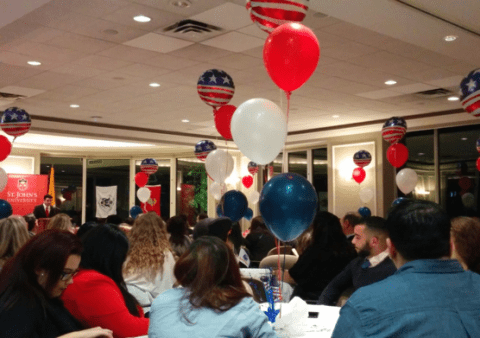 During the 2019-2020 academic year, they completed over 3,800 hours of community service, raised more than $12,000 for charitable causes and $1,600 for a chapter scholarship, and held their annual Military Heroes Dinner funding the Kappa Sigma Military Heroes Campaign. This organization of 26 initiated men was able to accomplish this while maintaining a combined GPA which surpassed the St. John’s University-Staten Island All Men’s GPA.

“FACE is one of the most prestigious awards a chapter can get,” said fraternity member Brian Gallagher. “It is an honor to be counted among the top chapters within our international fraternity, and to be looked upon so highly by our headquarters.”

“The Kappa Sigma Fraternity chapter on St. John's University Staten Island Campus has over the years continued to shine the Vincentian mission light in helping others and in acting as good brothers' keepers,” said David N. Gachigo, Associate Dean of Student Affairs.