For Johnny Wiley, a 2020 graduate of St. John’s College of Liberal Arts and Sciences, the journey of 3,454 miles from New York to the University of Cambridge began with a single step—and it was the one that first brought him to the Queens, NY, campus of St. John’s University.

When he arrives at Cambridge, Johnny will pursue a master’s degree in Development Studies. Founded in 1209, Cambridge is the world’s fourth-oldest surviving university—and one of the most prestigious and selective.

As a high school student growing up in Uniondale, NY, Johnny could not have imagined what his future held, but he was always certain about his potential. “High school was a struggle for me,” he observed. “I knew I could do the work, but it was a grind.”

Even before attending his first college class, Johnny made impressions and connections. “I had a random encounter with Johnny before he even started at St. John’s,” recalled Brian Browne, Executive Director for University Relations and Assistant Vice President for Government Relations. “He was coming out of the Welcome Center and he stopped to ask me where the Public Administration Department was located. I happened to be teaching a course in Public Administration that coming fall, so we struck up a conversation and have been talking politics and more, both inside and outside of the classroom, ever since.” 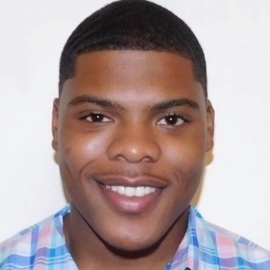 Already active in local politics and campaigns before enrolling at St. John’s in 2016 to study Government and Politics, Johnny volunteered with a local voter registration effort; at a nonprofit organization that dealt with foreclosed homes in his community; and at the NAACP. At St. John’s, Johnny quickly availed himself of many academic and extracurricular opportunities and became a recognized student leader.

During the spring semester of his first year, Johnny was awarded a Jeannette K. Watson Fellowship—a three-year, international internship program funded by the Thomas J. Watson Foundation. A Watson Fellow’s first internship must take place in New York City, the second can be anywhere in the US or abroad, and the final must be overseas. Johnny soon began traveling the world; his studies and independent research took him to Israel, Italy, Senegal, and Tanzania.

As he became more active on campus with Student Government, Inc. and the Debate Society, Johnny also earned membership as a Newman Civic Fellow and was accepted into the McNair Scholars Program. His college summers were spent completing internships, completing research, and working with his father at a construction company.

Konrad Tuchscherer, Ph.D., Professor of History and Director of External Scholarships and Fellowships, helped guide and mentor Johnny and attests to his character and intellectual curiosity. “Johnny was a student of mine and later he conducted research under my supervision on African immigration to the US. I have watched him traverse the world as a McNair Scholar and Watson Fellow and at the same time help transform our University community in student government. What defines Johnny is how he embraces the challenges and excitement of meeting new people, being in new places, and tackling serious issues.”

Fred P. Cocozzelli, Ph.D., Associate Professor of Government and Politics and Department Chair at St. John’s University, describes Johnny as a determined student. “What strikes me most about Johnny is his perseverance and awareness. For all of his success, Johnny was not a student to whom it all came easy. He worked hard and had to push himself intellectually and balance multiple personal challenges. He grew in self-awareness, persisted, and excelled. Johnny captures what St. John’s is really about: hard work and the opportunity to make ourselves and our world better.”

Reflecting on the totality of his St. John’s experience, Johnny encourages his fellow students to always dream big. “Have courage and go after big things. Students at St. John’s should know that they can achieve anything as long as they are committed 100 percent.”

He continued: “I decided to apply to both Oxford and Cambridge after being a finalist for a Marshall Scholarship and earned admission while competing with students from Ivy League schools with entire specialized departments devoted to their success. I had the support of faculty like Dr. Tuchscherer, Dr. Cocozzelli, and Prof. Browne, and I never felt intimidated or unprepared.”

With the support of his family, Johnny will travel to Cambridge, England, for the first time in October. Recounting how he shared the good news of his Cambridge acceptance with his parents, Johnny described that his mom cried tears of joy and his dad joked, “Cambridge...in Massachusetts?”

While his final semester on campus included a sudden pivot to remote learning, Johnny described earning his undergraduate degree as an accomplishment. “Commencement is not the end of my academic journey—it is only the beginning.”