Steven Smithwrick first enrolled as a student at the Queens, NY, campus of St. John’s University in the Fall of 1976. Last month—44 years after his initial higher education experience—Steven earned his Associate in Science degree in Business Administration.

As a student in 1976, Steven began his undergraduate studies at St. John’s as an education major. In retrospect, he admits that as a teenager living in Mount Vernon, NY, he was not academically focused.

“I loved my time at St. John’s,” he recalled. “I just did not always love studying.”

His mother encouraged him to stay the course at St. John’s, but after one year, Steven transferred to Stony Brook University, and then again to the State University of New York at Albany—before completely dropping out of college.

Life carried on and he would soon marry, help raise two sons, and develop a career in various management positions at Pitney Bowes Inc., Canon U.S.A., Inc., and Macy’s. As the years turned into decades, there was always something internally tugging at him to finish what he started at St. John’s.

Steven explains: “It is my nature—I always let other people get in front of me. It gradually became time for me to do something for myself.” 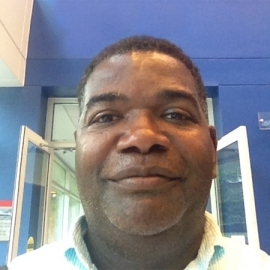 In 2017, Steven returned to St. John’s University and enrolled in The Lesley H. and William L. Collins College of Professional Studies to pursue an associate degree in business.

“The program at the Staten Island, NY, campus was convenient and affordable. I began slowly with one class at a time, commuting from work or my home in New Rochelle, NY.”

Returning to a college classroom after a 40-year gap was unsettling, but Steven quickly found his way and credits fellow students, and most especially the faculty, with easing his transition. “The faculty at St. John’s were so supportive,” he said.

For example, Steven described how Susan Glanz. Ph.D., Professor, Division of Administration and Economics, tutored him at his job while she was on a break from attending a seminar in Manhattan. “My coworkers could not believe that a college professor would come help me.”

He also cited Anna Elaine A. Licari-Lagrassa, D.P.S., Professor of Administration and Economics, as an ever-present resource for guidance and encouragement throughout his academic journey.

As a person who holds and values a strong Christian faith, Steven credits his supportive family, especially his mother and grandmother, for their guidance. “My family taught me well during my early years. I have tried throughout my life to be on time, look out for others, and always get the job done. I feel blessed that I have finished what I started; my college journey has come full circle.”

Sadly, Steven lost his mother to COVID-19 on Easter Sunday, just weeks before he finished his program. He takes comfort in his belief that she is still aware of his accomplishment. “I know that she is smiling in heaven,” he said.

Currently on furlough from his job due to the health crisis, Steven hopes to return to work soon and does not rule out further advancing his education. “All things are possible through Christ—and St. John’s!”