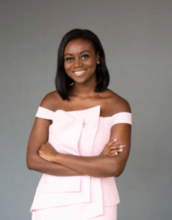 Beverly Danquah ’19CPS continues to pursue her passion while living the Vincentian mission as a 2019–20 Princeton in Africa (PiAf) fellow in Accra, Ghana. Ms. Danquah is the first fellow in her post and the only intercontinental fellow, as her role requires her to travel to Asia. PiAf fellows tackle projects in diverse sectors such as public health, education, and youth capacity building, and international humanitarian aid and development.

As an undergraduate, Ms. Danquah secured internships at top news media and entertainment outlets. She also served as a peer mentor with the University’s R.I.S.E. Network and as Chair of the Apollo Theater’s Young Producers Club, through which she produced and moderated the theater’s “Women of the World (WOW) Teen Summit: No Shade,” which sought to explore the impact of colorism on a global scale. In addition, she attended the University’s Discover the World: Europe program with support from a Benjamin A. Gilman International Scholarship.

“Before coming to St. John’s, I had no idea that I would be able to study abroad because I did not have the financial means,” she said. “I am forever grateful to the resources given to Gilman Scholarship alums for introducing me to Princeton in Africa.” Ms. Danquah, who is the child of immigrants from Ghana, traveled to her ancestral home in August.

Caroline Fish ’18L interned at the International Criminal Court in The Hague, Netherlands, where she worked on war crimes and crimes against humanity, including crimes involving sexual violence and sexual slavery.

“The International Criminal Court makes a concerted effort to address crimes of sexual violence and enslavement, which is important to me,” she said. “This effort provides validation that, on an international level, lawyers are needed to continue to make sure issues of sexual violence, enslavement, and human trafficking are addressed and that survivors are given hope.”

In July, Marie-Lise Gazarian, Ph.D., Professor and Director of the Graduate Program in Spanish, received the Jorge Luis Borges Award for Lifetime Achievement from Sigma Delta Pi, the largest foreign language collegiate honor society in the US. Dr. Gazarian is the first woman and one of only four individuals in the history of Sigma Delta Pi to receive this selective award, established in 2007. For more than 40 years, Dr. Gazarian has served Sigma Delta Pi diligently as the adviser of St. John’s highly engaged chapter, and as Sigma Delta Pi’s longest-serving regional vice president.

Ariana Junor, a Government and Politics major, moved a total of eight times throughout her childhood both inside the US and internationally. Those formative years were shaped by her interactions with diverse cultures and focused her worldview on international relations—a passion that has led her to the United Nations (UN) and to transcending borders to solve the world’s most pressing issues. Today, as a United Nations NAFSA: Association of International Educators youth representative, she attends briefings on topics ranging from the rescue of Jews in Albania during the Holocaust to the status of noncommunicable diseases in women’s and children’s health.

“Part of what I love most about the UN is its aspirational quality,” she said. “Through their agendas and sustainable development goals, they imagine a society that does not yet exist, but one in which they—along with other member countries, nongovernment organizations, and civil society—work toward.” She notes that more “tailored research” is needed for some regions to “address needs or even define problems, and “is working toward serving the UN in this capacity.”

In June, Michael A. Perino, J.D., Associate Academic Dean and the Dean George W. Matheson Professor of Law, St. John’s School of Law, taught short programs with two of the School’s international partners in China. As a visiting lecturer at Shanghai University of International Business and Economics, he lectured on US corporate law and regulation, providing an introduction into the legal foundation and ethical underpinnings of business law and regulation in US corporate law. At East China University of Political Science and Law, he spoke on insider trading law. These partnerships are designed to promote cross-cultural dialogue and increased global literacy at a time when the practice of law, particularly corporate law, is increasingly international.

Hannah Sweatman ’20C received the Boren Award Scholarship to study the Twi language in Ghana for a year. Aside from classes and language lessons at the University of Ghana, she traveled to many different parts of the country and worked with the Play and Learn Foundation, a nongovernment organization that works with underserved youth residing in the Okponglo community of Accra.

“I have learned so much and met so many incredible people,” she said.

Hannah also received a GAAP scholarship from St. John’s to conduct research in Ghana over the past summer. Her study is about access to proper toilets in the Okponglo community. “A little less than half of Okponglo residents have no access to private nor public toilets, so they have to relieve themselves in an area they call ‘the bush,’” she explained. “This poses many health risks as well as safety risks, which I have learned about through interviews and surveys with Okponglo residents and local doctors.” The long-term goal of her research is to present it to potential donors to raise enough money to install public toilets in the Okponglo community.

Following St. John’s Vincentian and global mission, international student Xiaoquing (Tiffany) Xu, a French and Public Relations major, interned during the spring 2019 semester for Première Urgence Internationale, an international humanitarian nongovernmental organization in Paris. During her semester in France, she worked on projects to aid Syrian and Colombian refugees. In her words, her experience was “a journey full of challenges and inspiration during which I was anxious, sad, excited, and proud of myself.” Already fluent in both Chinese and English, Tiffany added French linguistic and cultural fluency to her skillset while at St. John’s, further refining her ability to work effectively across global environments. (Photo: Tiffany Xu second from left)

The Lesley H. and William L. Collins College of Professional Studies (CCPS) continues to expand the international scope of its entrepreneurship offerings through the Global Development Entrepreneurship Program. CCPS’s short-term programs help students increase their ability to innovate and develop an entrepreneurial mindset by accessing global networks of peer inventors and mentors. They also provide students with opportunities to practice their own entrepreneurial skills while gaining visibility and partners to pursue their own innovative ideas. In 2018–19, a combined total of 24 students attended various international programs such as the European Innovation Academy, which is the leading youth accelerator program; the Nexus Maximus hackathon, focused on designing better community healthcare options; the ICSB Academy’s bootcamp on entrepreneurship for sustainable development; and the Global Entrepreneurship Week at Rotterdam University of Applied Sciences.

Roundtable Discussion Focuses on Crisis in the Caucasus