A half century ago, a series of monumental events took place over the course of one calendar year that would change the world and leave an indelible mark on history as one of the most culturally defining years to date. In this four-part series, we take a look back at life in 1969, as well as the people, places, and events of that year and their impact on society and the St. John’s community.

Part III: Let the Sunshine In

In August 1969, two years after the “Summer of Love,” more than 400,000 people made the trip to the hay fields near Max Yasgur's dairy farm in Bethel, NY, for the Woodstock Music and Art Fair.

Better known as simply Woodstock, the event was originally billed as “Three Days of Peace and Music.” A total of 32 acts performed that weekend, and the event carried over into a fourth day, with names like Jimi Hendrix; The Who; Santana; the Grateful Dead; and Crosby, Stills, Nash & Young performing, in some cases, into the wee hours of the morning. 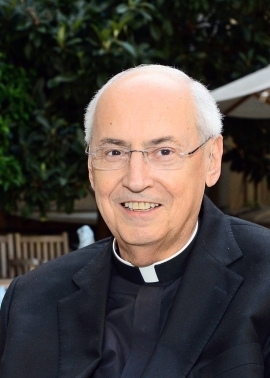 Among the scores in attendance was Rev. Joseph L. Levesque, C.M., President Emeritus of Niagara University and former President of St. John’s University.

Fr. Levesque had just completed his first postordination assignment at St. John’s Preparatory School in Brooklyn, NY, when he received a last-minute invitation from a friend to attend “some concert in upstate New York.”

“We had no idea of just how big of an event it was at the time,” he recalled. “We got off at the exit of the New York State Thruway and traffic slowed to a crawl, so we knew that this was more than just a concert.”

After making their way through miles of traffic, the car began to overheat. The pair pulled over and, with few options, decided to walk to the site of the now-legendary music festival. They arrived late Friday night but were able to enjoy the performances of Ravi Shankar and others in the rain.

“We sat on the hillside on some cardboard we found and had a wonderful time,” he recalled. “But when the show ended late that evening, I told my friend that there was no way I was going to sleep out in a field in the rain, so we walked to the car and drove home to Brooklyn.”

Looking back on the late 1960s, Fr. Levesque still has a fondness for the music of the era. “It was a rebellious time for young people, and it was reflected in the songs of the period,” he said. “Bob Dylan’s ‘Forever Young’ still resonate with me. The lyrics are about getting to know the youth of the time—we may not fully understand them, but we cannot write them off.”

Listed among Rolling Stone's “50 Moments That Changed the History of Rock & Roll,” Woodstock’s impact on concerts and festivals is still felt to this day, as it was a precursor to modern music festivals such as Lolapalooza, Coachella, Burning Man, and the SXSW Music Festival.

The 1970 film Woodstock earned an Academy Award for “Best Documentary Feature,” and in 2017, the site of the festival was added to the National Register of Historic Places.

To many, Woodstock marked the beginning of the end of the 1960s and its “flower power” ideals; however, the spirit of the original festival lives on in the memories it created for an entire generation.