A half century ago, a series of monumental events took place over the course of one calendar year that would change the world and leave an indelible mark on history as one of the most culturally defining years to date. In this four-part series, we take a look back at life in 1969, as well as the people, places, and events of that year and their impact on society and the St. John’s Community.

Part I: To the Moon and Back

On May 25, 1961, before a joint session of Congress, President John F. Kennedy announced the ambitious goal of sending an American safely to the moon before the end of the decade.

“We choose to go to the moon,” he declared in his famous speech at Houston’s Rice Stadium the following year. “We choose to go to the moon in this decade and do the other things, not because they are easy, but because they are hard, because that goal will serve to organize and measure the best of our energies and skills, because that challenge is one that we are willing to accept, one we are unwilling to postpone, and one which we intend to win…”

Seven years later, on July 20, 1969, his dream was realized when Apollo 11 commander Neil Armstrong emerged from the lunar module on the Sea of Tranquility, stepped onto the surface of the moon, and uttered the celebrated line, “That’s one small step for a man; one giant leap for mankind.”

That historic landing, which effectively ended the space race during the Cold War, would not have been possible without the tireless work of the more than 3,000 engineers at Bethpage, NY-based Grumman Aerospace, who designed and built—by hand—the Lunar Module that carried Mr. Armstrong and Buzz Aldrin to the moon. 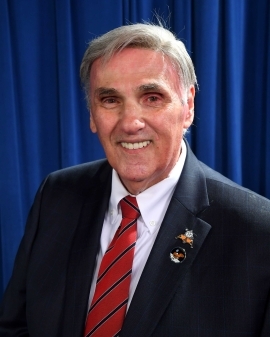 Among them was a young Bob A. Barone, who was hired as an Electromechanical Explosives Design Engineer for Grumman, and today is Associate Dean and Director of the Television, Film, and Radio Center in the College of Professional Studies.

“I graduated from college on a Friday in 1965 and started working as an engineer at Grumman on Monday,” he recalled. “I worked as an engineer on the mission-critical stage separation system of the Lunar Lander.”

Throughout his tenure at Grumman, Mr. Barone worked closely with NASA astronauts such as Jim Lovell (Apollo 13) to witness the testing of landing gear and stage separation system mechanisms and visited Cape Kennedy with the launch team.

Mr. Barone explained that, while a mix of science and technology made the moon landing possible, it also took a perfect confluence of other events.

“The time was ripe for the space program,” he noted. “We were being pushed by the Russian space achievements, such as Sputnik, so we had presidential support. The economics were right, and the politics were right. Plus, we had a generation of baby boomers who were coming of age after WWII, and they were risk-takers.”

Four months after Apollo 11 landed on the moon, Apollo 12 returned there—the first of five additional lunar landings that not only changed the perception of the US space program but lifted the spirits of an entire nation.