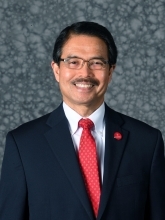 Conrado “Bobby” Gempesaw, Ph.D., is the 17th President of St. John’s University, one of the nation’s largest and most diverse Catholic universities with more than 21,500 students from 36 states and 119 countries. He is the first lay president in the 150-year history of the private, Catholic, and Vincentian university. St. John’s University has three New York City campuses—in Queens, on Staten Island, and in Manhattan. The University also has a campus in Rome, Italy, and academic locations in Hauppauge, NY; Paris, France; and Limerick, Ireland.

Upon assuming his position as president in July 2014, he immediately instituted a comprehensive University-wide engagement process to solicit feedback and input on four specific strategic priorities identified in his investiture address:

The resultant Strategic Priorities Action Plan reflects the broad-based and inclusive process through which it was developed. The four strategic priorities reflect a commitment to shared ownership and shared responsibility to promote academic excellence and advance the Vincentian mission of St. John’s University.

He is an accomplished scholar, teacher, and administrator, with more than three decades of academic and administrative experience and leadership in higher education. Prior to his appointment at St. John’s University, he served as Provost and Executive Vice President for Academic Affairs at Miami University in Oxford, OH. Previously, he served as Dean of the University of Delaware’s (UD) Lerner College of Business and Economics and Vice Provost for Academic and International Programs. He also served as Interim Dean of UD’s College of Arts and Sciences and Chair of the Department of Food and Resource Economics. He joined UD as an assistant professor in 1985, was awarded tenure and promoted to associate professor in 1989, and was promoted to full professor in 1993.

His field of research and expertise is in higher education administration, financial simulation analysis, marketing, and international trade. He has published more than 100 journal articles and conference proceedings, and supervised 32 master’s theses and dissertations. He earned his B.A. in Economics from Ateneo de Davao University in the Philippines, M.S. in Agricultural Economics from West Virginia University, and Ph.D. in Agricultural Economics from Penn State University. He was a recipient of the Outstanding Teaching Award from the University of Delaware’s College of Agricultural Sciences and the Outstanding Alumni Award from Penn State University’s College of Agricultural Sciences. He has been recognized with the 2017 Penn State Graduate School Alumni Society Lifetime Achievement Award and he was the speaker for the summer 2017 Penn State graduate commencement.