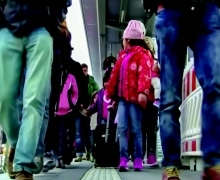 Sr. Norma Pimentel, M.J., and Dohra Ahmad, Ph.D., presented "Migrants and Mission" at St. John’s 11th Biennial Poverty Conference on October 3, 2020. This conference focused on the experiences of migrants journeying to the United States. Sr. Norma works directly with the migrant community at the Texas-Mexico border in El Paso, TX. Her presentation was followed by a lecture from Dr. Ahmad, a St. John's faculty member and author who writes on the issue of immigration. The conference concluded with a conversation between presenters and attendees.

About the Poverty Conference Speakers

Norma Pimentel is a sister with the Missionaries of Jesus and a licensed professional counselor. As Executive Director of Catholic Charities of the Rio Grande Valley, she oversees the charitable arm of the Diocese of Brownsville, providing oversight of the different ministries and programs in the areas of emergency assistance, housing assistance, counseling, and pregnancy care to all four counties in the Rio Grande Valley.

Sister Norma chairs the local Emergency Food and Shelter Program that distributes federal funds to local agencies providing assistance to the area’s poor. She also leads efforts in the community that responds to emergency needs and provides relief in times of disaster and crisis. She was instrumental in organizing community resources to respond to the surge of Central Americans seeking asylum in the United States and setting up Humanitarian Respite Centers in McAllen and Brownsville, Texas in June 2014.

These efforts brought Sister Norma recognition as a recipient of the 2015 Martin Luther King, Jr. “Keep the Dream Alive” Award from Catholic Charities USA and a nomination for “Texan of the Year”. In March, 2015, she spoke at the UN Headquarters in New York City at the invitation of the Permanent Observer of the Holy See to the United Nations.

During the U.S. Papal visit, Sr. Norma met with Pope Francis in New York City and presented him with one of her original paintings, which depicted an immigrant mother and child. She was first introduced to Pope Francis in August 2015 via a “virtual town hall” arranged by ABC news, which later aired in a one-hour special edition of “20/20”. In December 2015, Our Sunday Visitor named Sister Norma as one of eight Catholics in the Year, “men and women, religious and lay — who made an indelible mark in 2015.”

Dohra Ahmad is Professor of English at St. John’s University and has been teaching since 2004. She teaches classes on 20th  and 21st  century world literature. She is the author o f Landscapes of Hope: Anti-Colonial Utopianism in America, co-author (with Shondel Nero) of Vernaculars in the Classroom: Paradoxes, Pedagogy, Possibilities, and editor of  Rotten English: A Literary Anthology  (W. W. Norton, 2007) and  The Penguin Book of Migration Literature  (Penguin Classics, 2019). Her essays have appeared in ELH, the Yale Journal of Criticism, Social Text, Pedagogy, and the Journal of Commonwealth Literature.